A little here - a little there

I actually have been getting a little done: 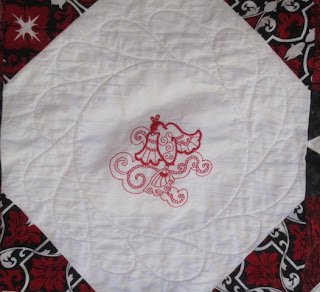 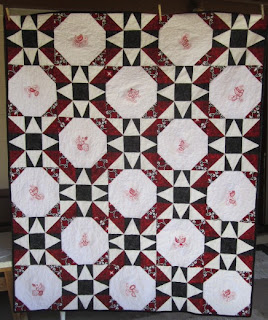 You've seen this quilt before, but not in it's finished state.  I had decided to leave it unbordered and after quilting just bound it with black.  I did like the way it turned out except because I'm so NOT a perfectionist, I lost some of the points around the edge.  A longway from proficient on feathers, but the 'sort of' feather wreath around the bird embroidery doesn't totally embarrass me. 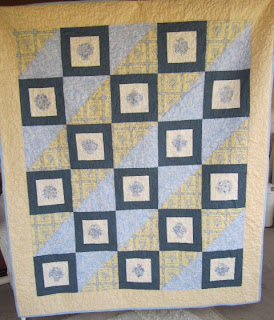 You've seen this one before, too, also in it's unfinished state.  I used just a pale yellow to border it and quilted it will a simple floral and leaf free hand design. 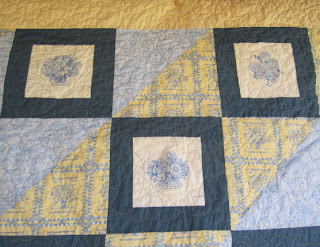 The fabrics are busy enough that the quilting doesn't show up real well - but you get the idea :-)
I've also made a couple fabric Post cards and another Mug Rug (pictures later) for a swap I joined.
I had a couple days of not feeling too well, so those were days of total unproduction - bummer!
I had made the decision to have my cataracts removed and went in for another evaluation and consult with the doctor.  Because I have astigmatism, the doctor recommended a lens implant that would correct that, but unfortunately insurance wouldn't cover that expense as they consider it 'enhanced'!  At first, I thought well, if I'm going to have this done, I might as well go for broke - and with out-of-pocket expense - that's exactly what I'd be.  But even after that, I'd have to wear readers and glasses for computer work.  So... I spend probably 80% of my waking hours either sewing or on the computer (I know I need to get a life!) - which would require glasses of some sort or other AND I've worn glasses for over 40 years so why would I put that sort of extra expense out for 'enhanced' lenses???  Seriously, I spent most of Thursday night awake running all this through my brain....  Okay, decision made - going with the standard lenses with a whole lot less out-of-pocket expense!  So call doctor's office and talking to his 'financial secretary' discover she's a quilter - and she agrees with me.  With having to wear glasses for sewing anyway and with having the cataract removed, I'll have the clearer vision so major issue corrected and I'm happy.  Okay enough about that, but I would like to hear other's experiences with cataract surgery and how it improved your vision and sewing experience.
Well if I haven't bored you to tears at this point........Update on granddaughter's sewing days with me.. Still tons of fun.  She's learning difference aspects of sewing.  Yesterday, she spent time with the embroidery machine and learned the frustration of breaking threads :-)  I slowed down the machine and, voila, smooth sailing.  I told her "well, it'll take a little longer to sew out the designs"  her response was "probably not because I'm not spending time rethreading the machine" (Smart girl!)  She's already planned our next day - she has fabric chosen and patterns ready and she wants to spend time cutting things out for a couple tops and a pair of shorts.  She really likes wearing what she's sewn for herself.  That said, if you've followed along and read about the used machine I bought her, well, now it's time to buy her a machine that won't leave her frustrated......... NOTE: her grandpa has already started looking at them :-)
Okay, I'm done - sorry so long, but I'm making up for a few days of no posting :-)

Just do it, you will be so happy a day after the surgery, de world will look more colourful and bright. And you will see so much more Here in de Dutch it takes a few ours and than you be home again. De surgery self takes 20 minutes and is completely painless. Do not do gardening for about 2 months because,the dust could infect your eyes.
I did it tree times, and now my right eye is from 5% to 85 % June 30 I will get a corneal transplant and maybe a can drive next year after 11 years of living in de darkness.
I will think about you every day and wish you all the luck and good results.
Gerda

I'm just now catching up on reading blogs Katie I had cataract surgery on each eye and couldn't be happier colors were true again not yellowed. and the trifocals are on my face all the time so I can see to do it all. just don't do it before sew fest cause it takes time to get new glasses and we want you seeing us all in your not so good vision:) mary